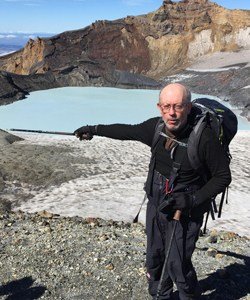 Bruce Houghton, the Gordon A. MacDonald Professor of Volcanology and Science Director of the National Disaster Preparedness Training Center at the University of Hawai‘i at Mānoa (UHM) was honored recently with the Thorarinsson Medal from the International Association of Volcanology and Chemistry of the Earth's Interior (IAVCEI). The Thorarinsson Medal is awarded only once every four years by the IAVCEI for outstanding contributions to volcanology, and is the highest award in international volcanology.

“A giant of volcanology, Bruce has tackled ‘big’ problems in geology with innovative approaches and technologies, and is truly a scientist of outstanding distinction,” stated University of Tasmania’s Rebecca Carey in her nomination letter. “His research has not only generated a wealth of new scientific understanding, but also critically Thorarinsson-type pioneering advances in long-standing cornerstone volcanologic concepts.”

Houghton and his predecessor at UHM, George Walker, are among the only 9 volcanologists to-date given the Thorarinsson award, an award named for the noted Icelandic geologist and volcanologist Sigurdur Thorarinsson.

Houghton reflected on becoming a Thorarinsson Medalist; “I was delighted and surprised by the award. All my research is collaborative and, since moving to UH 70% of my papers have been first-authored by my students or postdocs, and these are not the type of statistics that usually lead to such awards. I was particularly pleased because all three of my mentors in volcanology are in the list of eight prior winners of the medal; it is quite humbling to be joining them.”