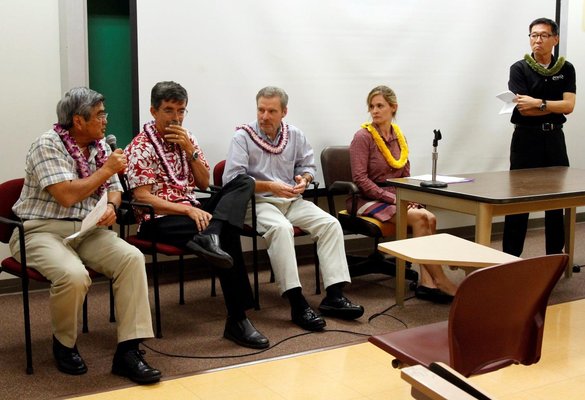 Thursday night we were incredibly lucky to attend a symposium aimed to help Hawaii prepare for its greatest time of need. Hawaii’s best natural disaster researchers, scientists, planners and leaders came together to help the public understand the lessons learned from the horror of Katrina, what needs to be done NOW and plans for the future of Hawaii. It is a call for action.

“Katrina was very well forecast, with time for people to get to safety but the human response was really the problem.” Dr Barnes tell us. “What was important was how big she got. Maintaining strong winds for a long period of time (hours!) produced a strong surge.” He likened this to a tsunami surge where the only real safe option is to retreat. He questioned the safety of our coastal comminutes such as Waimanalo, backed against the mountains that create strong downslope winds, and offer no high ground for refuge. Dr Barnes advocates the use of large scale models to “deliver the goods” as we plan for and predict weather related disasters.

“Evacuation is needed to save lives!” These words carry weight when spoken by Dr Robertson, a leading expert on structural engineering. “Katrina was not a structural failure, it was a geotechnical failure.” Buildings are no designed for water to push up underneath them for hours at a time. Bridges are not usually tied down, so when hit with the water rising from underneath, they just floated away. Water under buildings created air pockets that exploded or popped out the concrete panels above it. Dr Robertson has seen this damage first hand. “The force of the water flow is phenomenal.” The lessons from Katrina were very valuable. “You can build better if you know better.” Hawaii has been doing a great job of assessing our bridges since Katrina. Now they need to replace them. Puanluu bridge has been a great success; raised higher, all parts attached with panels designed for uplift, but there are 27 critical bridges still to fix in Oahu. And what about Sand Island? The bridge should survive but should our gateway to outside supplies be stored adjacent to our largest fuel storage on the shoreline near the airport? In a surge like Katrina fires and what else would happen?

As a research student, Dr Darrah was drawn to the profound human impact of this disaster. Why was it so horrific? She showed us maps of a racially segregated city. Concentrations of poverty governed by race. It was horrific because the people in need the most, who already had the least resources and were just trying to get through each day, were surrounded by other people, also in poverty, also with few resources. These were predominantly African American communities. When they were thrown into an emergency situation, there were no extra resources to help then and nobody to help. They were the hardest hit and the slowest and least successful to recover. 10 years later and they have still not recovered. Others who had more resources were surrounded by others with more resources. We need to look honestly at our own communities here in Hawaii to identify and prepare people living in concentrations of poverty governed by race.

“How do we rebuild? What kind of strategies do we use? Are you prepared to pay for safety?” Mr Atta brought to the front political planning aspects about designing and rebuilding resilient communities and the balancing act of public integration and making hard decisions. Resilience requires sensibility and an awareness of the natural environment. Increasing safety comes at a cost. With a move towards affordable housing, is it better to live in something a little less safe or not at all? The fire department would like it to be compulsory for houses to have sprinkler systems at $12-$14 K per household, but is it realistic? Can the average Hawaiian family afford this? At the very least, I would listen to Dr Robinson. “It costs more to design tough. Hurricane clips for roofs for $1000. Just do it!” Hawaii, we need to “Just do it”. It is time to take these hard learned lessons from Katrina and make something good to survive the storm.

Congratulations on these worthy and impressive award winners who opened the evening. The awards were presented in conjunction with this event and in celebration of “World Town Planning Day”.

Claudia Shay, Planner Who Made a Difference