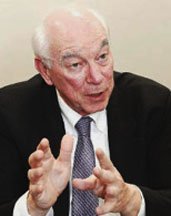 Dr. Eddie Bernard, subject matter expert and instructor with the National Disaster Preparedness Training Center (NDPTC) and a noted oceanographer and tsunami expert, encouraged Japan to expand its use of the recently-installed global tsunami observation system

Bernard made these comments during an interview on April 16th with Kahoku Shimpo, a newspaper in Sendai City, whose coastal areas suffered massive damage from a magnitude 9.0 offshore earthquake in 2011, which triggered a destructive tsunami.

“The system can detect small tsunamis of several inches, and this information can quickly and accurately determine the threat of the tsunami,” said Bernard in the interview. “For example, data collected by Chilean buoys off Chile can be used by Japan to assess the tsunami threat to Japan. Shared data benefits all nations. The world needs about 200 buoys worldwide and about 100 for the Pacific. Such a system could detect tsunamis, in some cases like Japan, as soon as 10 minutes.”

The current tsunami warning system was put in place with 6 buoys off the Alaska Coast in 2003. Currently there are 60 buoys deployed by eight countries, including Japan, which joined in October 2012 with three buoys off Sanriku, explained Bernard, who is the former Director of the Pacific Tsunami Warning Center in Hawaii. “The observation system detects tsunamis in the deep ocean and relays these data to a surface buoy,” said Bernard in the interview. “Data from ocean buoys are sent via satellite.”

“If such a system had been in place during the eastern Japan earthquake, the inundation areas could have been predicted within 30 minutes,” suggested Bernard. “Rather than using tsunami heights prediction, which confuse people during evacuation, provide a flooding forecast that could be disseminated via smartphones. Technologies are available today if Japan wants to apply it.”

Bernard currently is an Affiliate Professor at the University of Washington and Scientist Emeritus for the National Oceanic and Atmospheric Administration's (NOAA) Pacific Marine Environmental Laboratory (PMEL).